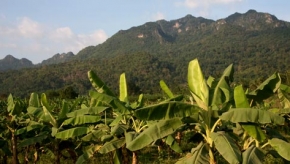 This biodiversity conservation corridor is located in the Tenasserim Range in western Thailand, between the Western Forest Complex and the Kaeng Krachan Complex. To the west, the corridor borders forested areas in Myanmar.

The corridor starts at the southern tip of Sayok National Part and stretches down to the northern border of Maenam Phachi Wildlife Sanctuary. Approximately 70km in length, the corridor encompasses 66,700 hectares. It includes areas under administration of the Royal Thai Army and the Royal Princess Project (NHP). Pilot activities focused on four cluster areas within the corridor, containing 20 villages and 12,453 people.

An initial survey in the corridor and adjacent protected areas found evidence of 23 species of large- and medium-sized mammals, as well as two large birds. As a result, an element of its design focused on facilitating the movement of wildlife between two adjacent protected areas, enabling landscape species such as elephants, big cats and the Great Hornbill, to stay in the corridor for a while during migration.

Most of the pilot site population have limited land or no access to land for agriculture, hence many are dependent upon the forest and its products to support their livelihoods. This is further exacerbated by a growing population, due to in-migration and refugees.

The pilot site activities were conducted under three main areas: poverty reduction, land use planning and land management, and restoration and maintenance of ecosystems.

Poverty reduction initiatives included the distribution of US$112,000 via the Village Revolving Fund, as well as the creation of new conservation-based employment opportunities – such as the establishment of village nurseries in four villages, where local people gained income from seedling production. Training was also provided on the production of herbal toiletries as a distinct livelihood alternative.

A series of village meetings led to the creation of land use zoning for the corridor, dividing it into maintenance zones, natural regeneration zones, man-made restoration zones, and sustainable use zones.

Restoration work included the construction of 603 check dams, which help to control water flow during the rainy season, while 280 hectares was identified for forest restoration and is now being restored with community participation.

Implementation of the project has been led by the Wildlife Conservation Society.