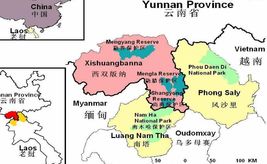 Chinese and Lao PDR environment officials agreed last week on a three-year plan to scale up transboundary conservation efforts in the Mekong Headwaters.

Since 2006, the two countries have been working together to better protect around 200,000 hectares of tropical rainforest; important habitat for rare plant species and iconic animals including the Asian elephant, tiger, and Indian bison (Gaur).

Officials there agreed to focus efforts for the next three years on activities including joint patrolling, a biodiversity baseline information survey, livelihood improvement activities, and establishing an information/knowledge exchange system. To support these activities, capacity building for nature reserve officials and local communities will be a priority.

The Core Environment Program (CEP), which established biodiversity conservation corridors in Xishuangbanna , has supported the annual meetings between Lao PDR and PRC.  CEP representatives attended last week’s meeting, and will draw on the lessons and experience from the Mekong Headwaters to scale up transboundary collaboration in other GMS biodiversity landscapes, a key objective for CEP under its new phase.