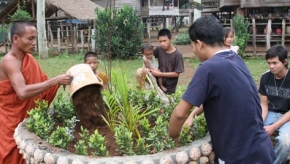 This biodiversity conservation corridor pilot sire in the south of Lao PDR covers a 32,000 hectare strip of land in Champasak Province, between the Dong Hua Sao and Xe Pian national protected areas.

The corridor is rich in a variety of wetland habitats and biodiversity, with natural forest covering 94% of the pilot site and adjacent areas. The area provides an important source of non-timber forest products which poor villagers depend on for their livelihood.

Threats to biodiversity come from land conversion, over exploitation of forest and wetland resources, and invasive species. Wetland bird species are particularly vulnerable, with some going extinct (such as the Black Kite and Greater Spotted Eagle). Also at risk are a variety of mammals, such as the Large-spotted Civet – a rare species of global conservation significance.

Eleven villages in the eastern half of the corridor were selected for pilot site activities in the first stage, covering a total population of 6,678 and an area of 11,000 hectares. Within the villages there is a high incidence of poverty and a heavy reliance on natural resources for their livelihood.

The BCI Project  supported land use planning and mapping by the National Land Use Management Authority (NLMA) with a view to determine village boundaries and to provide accurate GPS-based parceling of land plots and land certificates. In addition, the project completed an initial forest cover analysis, identifying potential corridors for ecosystem connectivity.

Results from the impact assessment found that 50% of the households in the target villages received support from the BCI project, of which nearly 80% perceived improvement in their livelihoods.

The World Wildlife Fund was the lead implementing agency, with support from the International Union for Conservation of Nature and other partners.

In recognition of the importance of the project, in early 2011, Lao PDR received a $20 million grant from ADB to further the work begun by CEP-BCI. The site is now under the remit of the Biodiversity Conservation Corridors Project (BCC).