Republic of the Union of Myanmar

Myanmar forms a bridge between the peoples and cultures of South and Southeast Asia. The largest country in the subregion, it borders India and Bangladesh to the northwest, PR China to the northeast, Lao PDR to the east, and Thailand to the southeast.

Along with substantial arable land, Myanmar is endowed with large freshwater and marine resources, and significant deposits of minerals including oil and gas. Its forest resources cover 48.3% of the land area and include 80% of the world’s remaining teak supply. The country, once called the "last frontier of biodiversity in Asia," has 251 known species of mammals, 272 reptile, 1,056 bird, and 7,000 plant species.

In recent years Myanmar has made encouraging progress towards environmental management. Forest protection has improved, as has access to clean drinking water. At the regulatory level, the country has adopted both the United Nation’s Agenda 21 and Rio Declaration on Environment and Development, and in early 2012 approved a new environment law.

To plan and implement sustainable development initiatives, the government recently formed the Ministry of Environmental Conservation and Forestry (MoECAF), granting it a stronger mandate than the two bodies it replaced – the Ministry of Forestry and National Commission for Environmental Affairs. MoECAF is currently drafting regulations to enact the new environment law.

The Tenasserim and Xishuangbanna BCI conservation corridor pilot sites cover transboundary corridors with tiger and elephant landscapes that include Myanmar territory. Both rounds of national environmental performance reporting have included Myanmar and it was also one of the focus countries for the GMS component of the Asia-Pacific Forestry Sector Outlook Study II, a FAO initiative supported by CEP.

Two SEAs – one on the North-South economic corridor and the other on tourism in the Golden Quandrangle – involved Myanmar analyses. Participants from the country have attended GMS capacity building events, such as training sessions conducted under the Phnom Penh Plan.

Click here to find out more about these activities and other CEP work in Myanmar. 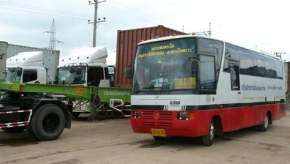